Brain implants that electrically stimulate, block or record signals from single neurons or groups of neurons in the brain are becoming increasingly common in the field of brain and neurological medicine and rehabilitation. (The blocking technique is known as intra-abdominal vagal blocking.)

Important: Some brain implants can stimulate and record simultaneously.

Today, most brain implants are either attached to the brain´s cortex or placed on the surface of the brain.

One special category of brain implants creates an interface between a neural system and a computer system.

Examples of situations where brain implants are currently used:

In order to create successful brain implants, researchers must know where the functional associations of these neurons are, and this is complicated due to the complexity of neural processing. This field of research has moved forward a lot in the 21st century, partly in thanks to advances in computer processing power.

Brain implants can be made from a variety of materials, depending on their intended use. Examples of common materials are silicon, platinum-iridium, tungsten, and stainless steel. At the research stage, nanoscale carbon fibres, so-called nanotubes, are showing promising results. 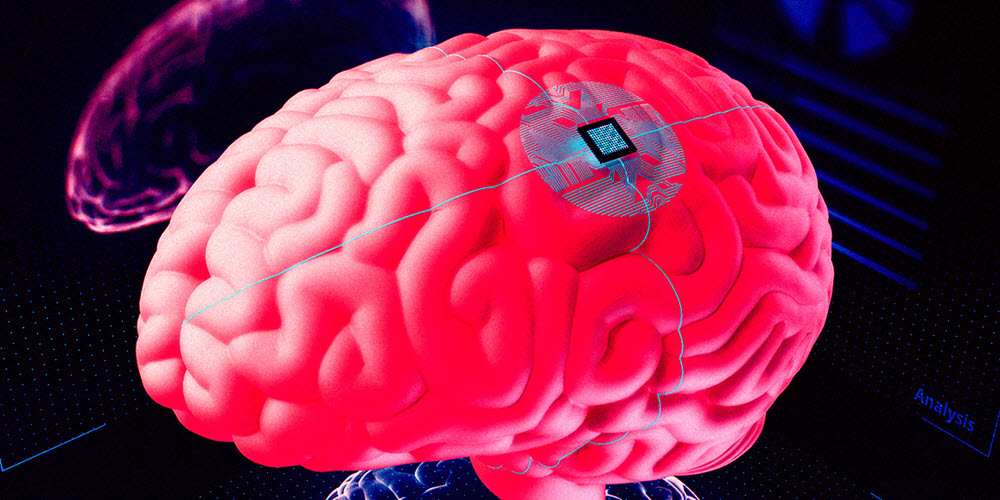 Since the 1990s, neuro-stimulating brain implants have been used to decrease the symptoms of health issues such as Parkinson´s disease and epilepsy. One example of a technology that is currently in use is the neural implants that provide deep brain stimulation for patients with Parkinson´s disease.

A lot of research is currently going on regarding how to use brain implants to circumvent areas of the brain that have been damaged, e.g. after a traumatic head injury or a stroke.

The cochlear implant is a neuro-prothesis for users with bilateral moderate-to-profound sensorineural hearing loss. It bypasses acoustic hearing by directly stimulating the auditory nerve with electricity. Through training, the user will learn how to interpret those signals as sounds.

A cochlear device bypass most of the peripheral auditory system, as it is capable of picking up sound and digitize it. The digitized sound is covered into electrical signals, which are transmitted to electrodes in the cochlea. (The cochlea is the part of the inner ear involved in hearing.) When the electrodes electrically stimulate the cochlear nerve, signals are sent to the brain.

In a 2012 study headed by Leigh Hochberg, two individuals with tetraplegia controlled robotic arms through their thoughts when connected to a neural interface named the BrainGate. The two participant could use the robotic arms to reach for and grasp objects. One of the participants, who had been paralysed for 15 years, even used the system to serve herself coffee.

Controlling your computer with your thoughts

In 2020, two individuals were able to use Synchron´s Stentrode brain-computer interface to control a Surface Book 2 computer running Windows 10. They could text, shop online, do banking, and email.

The Stentrode brain-computer interface had been implanted through the jugular vein instead of open-brain surgery.

In the United States, the Defense Advanced Research Projects Agency (DARPA) is researching brain implants as a part of the Reliable Neural-Interface Technology (RE-NET) program. The aim is to create high-performance neural interfaces for DARPA´s advanced prosthetic limbs.

Another example of a neural implant that is currently being developed is one that imitate the signal processing of neurons required to create long-term memories. In the future, people with certain brain issues that prevent them from forming long-term memories might be helped by these Prosthetic Neuronal Memory Silicon Chips.