The Hybrid Assistive Limb, commonly referred to as HAL, is a powered exoskeleton suit designed to support and expand the physical capabilities of its users – especially people with physical disabilities or those involved in search and rescue operations.

There are two main versions of HAL:

HAL was developed in Japan by Tsukuba University and the robotics company Cyberdyne. The first prototype was ready in 1997, and the full HAL-5 suit was displayed in 2012.

At the time of writing, HAL is mainly used by disabled patients in a hospital or nursing home setting. 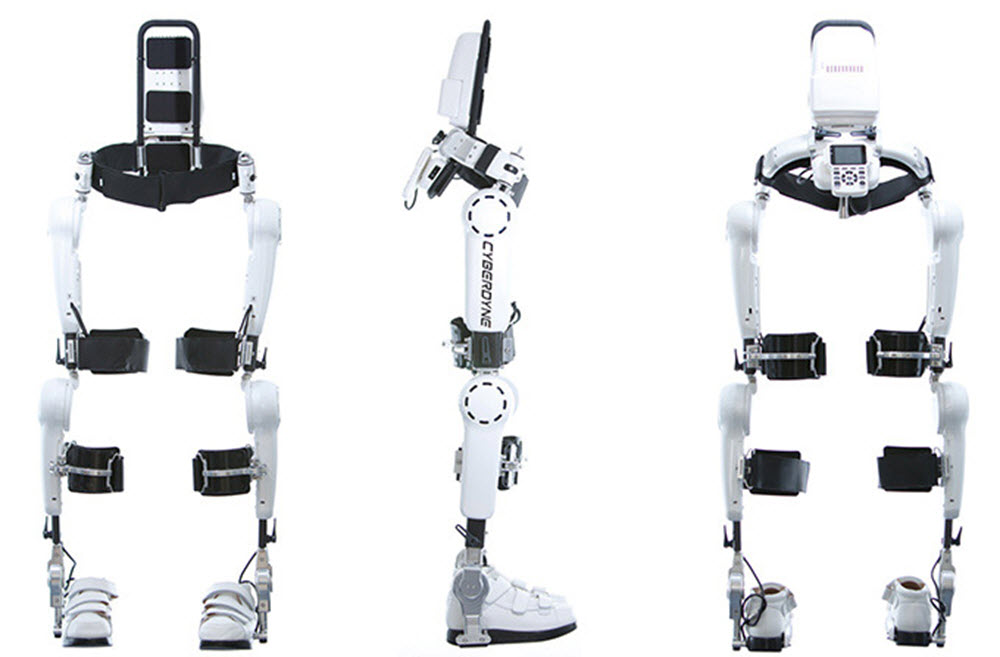 When a person attempts to move their body, nerve signals travel from the brain to the muscles through the motor neurons. When this happens, small biosignals can be detected on the surface of the skin.

HAL is capable of noticing these biosignals through a sensor attached to the skin of the user. HAL will use these signals to support and amplify the movement intended by the user.

The company Cyberdyne was founded in 2004 by professor Yoshiyuki Sanaki at the University of Tsukuba to develop his ideas for an exoskeleton suit. The suffix “-dyne” refers to power.

Yoshiyuki Sanaki had been fascinated by robots since he was a child, and dreamed of making a robotic suit to support humans. He began developing HAL in 1989, after receiving his Ph. D in robotics. In 1990-1993, he mapped out the neurons that govern leg movement, after which he and his team spent four years to create a prototype of the necessary hardware.

In the early 2000s, the third HAL prototype was created, and it was attached to a computer. It was a rather impractical suit, as it weighed a lot and required to assistants to put on. The battery alone weighed 22 kilograms. (Some later HAL models weighs only 10 kilograms and both the battery and the control computer is strapped around the user´s waist.)

In early 2009, Cyberdyne announced that they would start distributing the HAL 5 powered exoskeleton, and that HAL 5 could augement body movement and increase user strenght by up to ten times. Two years, in 2011, later Cyberdyne and Tsukuba University jointly announced that hospital trials of the full HAL suit would begin the following year.

2011 was also the year when Cyberdyne presented a legs-only HAL version.

2012-2013: Institutional use and certifications

By October 2012, over 300 HAL suits were used by 130 medical facilities and nursing homes in Japan. The institutes could rent them from Cyberdyne instead of buying them. Back then, the rent was approximately 2,000 USD per year (178,000 JPY).

Before the year was over, Cyberdone had recieved its ISO 13485 certification from Underwriters Laboratories. This is an international quality standard regarding the design and manufacturing of medical devices. In February the following year, the HAL suit became the first powered exoskeleton to receive a global safety certificate in Japan, which helped pave the way for a wordwide rollout of the product. In August 2013, HAL recieved an EC certificate, permitting its use for medical purposes in Europe.

2013 was also the year when ten Japanese hospitals carried out clinical evaluations of the legs-only HAL.

2014: HAL for construction use

In late 2014, the Japanese construction contractor Obayashi Corporation started using a version of HAL optimized for construction use.

In 2017, the Saudi Arabian company Abdul Latif Jameel Company Ltd signed a memorandum of understanding (MoU) with Cyberdyne. The plan is to use HAL to assit people with traumatic spinal injuries in Saudi Arabia.