A Flex-Foot Cheetah running blade replaces the hinge of an ankle with the elastic compression of a carbon-fibre-reinforced polymer capable of storing kinetic energy from the user´s steps as potential energy and then releasing it, like a spring. The material is strong and lightweight and has a high strength-to-weight ratio. Most versions of the Flex-Foot Cheetah use epoxy as the polymer. 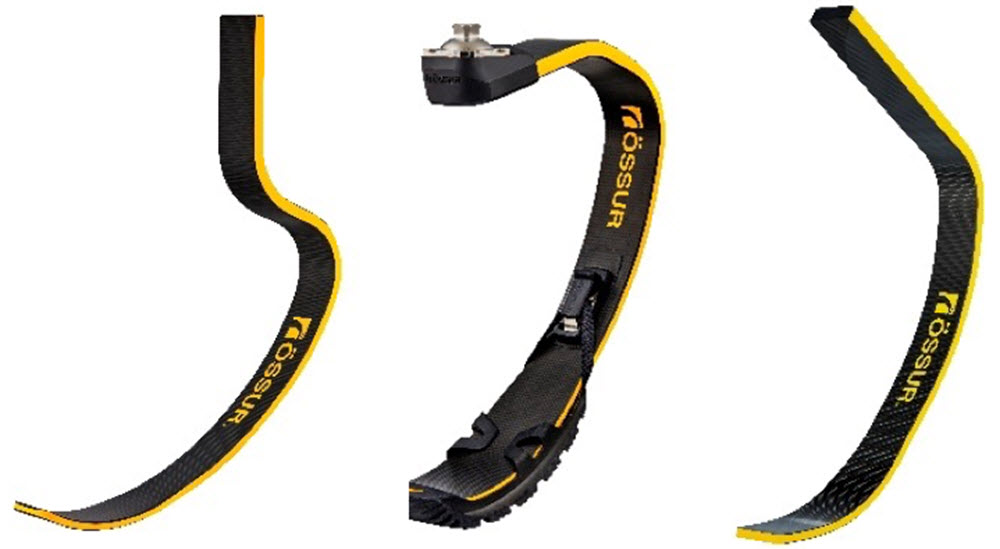 During production, sheets of carbon-fibre-reinforced polymer are cut into squares and pressed onto a form to produce the desired shape. Anywhere from 30 to 90 sheets are then layered, depending on the user´s requirements. (The weight of the user plays a role here.) An autoclave is used to fuse the sheets together to obtain a solid plate. When the plate is cool, it is cut into the shape of blades. The finished blade is bolted to a carbon-fibre socket, which has been designed for the intended user.

Due to the curved design, the blades should be slightly longer than was the user´s biological leg would have been (including the foot).

At the time of writing, Flex-Foot Cheetah is produced by Össur, an Icelandic company specialising in equipment for orthopaedics, including bracing and support products, compression therapy, and prosthetics.

About the inventor Van Phillips

After losing one leg below the knee at age 21, Van Phillips (born in 1954) was motivated to attend the Northwestern University Medical School Prosthetic-Orthotic Center. After graduating, he worked as a biomedical design engineer at the University of Utah, USA, before starting his company Flex-Foot Incorporated in 1984.

In 1999, Van Phillips established the charity Second Wind, and the following year he sold the Flex-Foot Cheetah to the manufacturer Össur. Second Wind is focused on providing inexpensive and resilient prostheses to amputees around the world, including mine victims.

The Flex-Foot Cheetah and similar models have become famous through the Paralympics, where roughly 90% of leg amputee runners use some variation of the original Flex-Foot design. Runners who wear prosthesis on both legs compete in the T43 class, while the T44 class is for runners with one natural foot and one prosthesis. Flex-Foot Cheetah or similar running blades also feature in popular culture. One example is the Half-Life computer game franchise, where the scientist Dr. Eli Vance wears a Flex-Foot Cheetah prosthetic that replaces his left leg beneath the knee. In the film Kingsman: The Secret Service, the villain Gazelle wears two specially adapted leg-blades similar to Flex-Foot Cheetahs.

Outside the world of fiction, one of the people who have contributed the most to making running-blades well known around the world is the South African double-amputee athlete Oscar Pistorius, who successfully competed in both amputee running events an non-disabled running events. He is no longer competing, as he was sentenced to prison after killing his girlfriend Reeva Steenkamp by shooting her four times in 2013.

During the later part of his running career, he wore Flex-Foot Cheetahs that had been specially adapted with custom-made spike pads. Before these pads had been developed, he instead used over-the-counter spikes that had to be manually applied.

When Pistorius began competing in non-disabled races, researchers discovered something interesting. A typical non-amputee sprinter will slow down as the race progresses, but Pistorius started slowly, and increased his pace during the second half of the race. Controversy of this running pattern arose, and he eventually stopped using it.

The calves and ankles of non-amputee sprinters return and amplify the energy supplied by their hips and knees, and amputee runners must compensate for this by using more work. An analysis published by Engineering & Technology magazine estimated that Pistorius, compared to a non-amputee sprinter, had to generate twice the power from his gluteal and quadriceps muscles. Other sources claimed that his core abdominal muscles and fast arm swing also helped compensate for his lack of calves and ankles. According to Pistorius´s trainer, roughly 85% of his power came from his hips and the rest from his knees.

Pistorius waddled slightly during races, as he swung his upper body to balance the spring action of the blades. As a blade sprung off, he would swing it slightly out to the sides and then throw it forward for the next stride.